In the age of social distancing, which is here to stay in the foreseeable future, new forms of social solidarity are being witnessed. FES partner organisations and their networks, staff and volunteers are committed and engaged to mitigate the impact of COVID 19. We are in this together and will emerge out of this together - more unified and more connected. 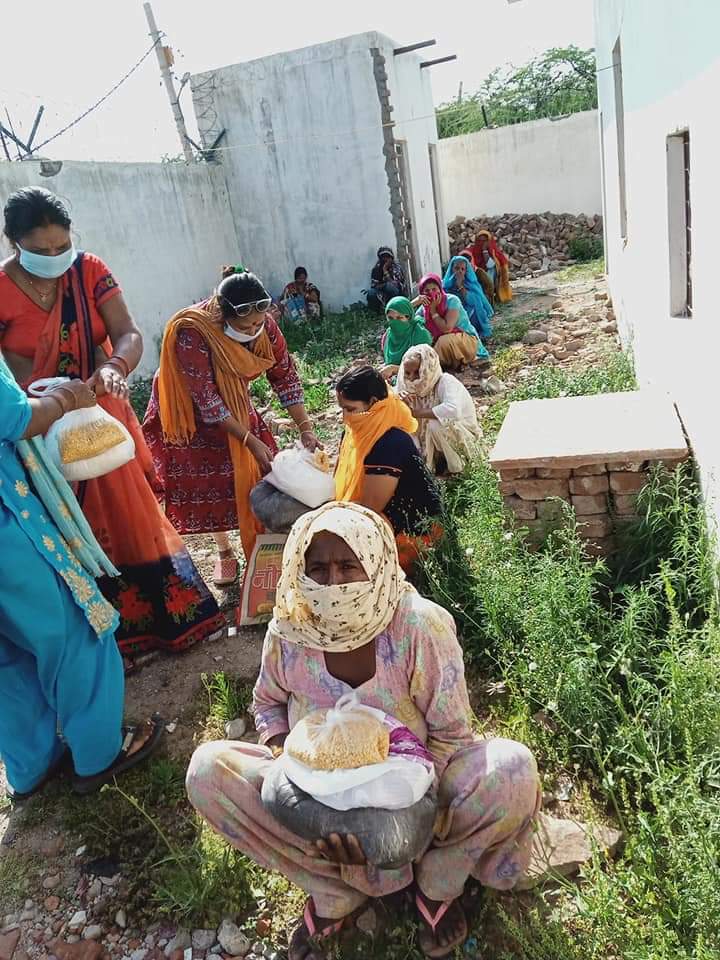 For a country the size of India, with a billion plus population, calling COVID 19 a disaster is an understatement. Till date we have 5000 plus cases with around 150 deaths. Maharashtra, Tamil Nadu and New Delhi are the worst hit states. Fortunately, the measures to combat the pandemic began in early February by screening passengers at 21 airports and 77 seaports when the number of known cases were just 3. This was later increased to universal screening.  On March 11 the WHO declared COVID 19 as a pandemic. On 13th March 2020 with cases going up to 100 in India it was declared a disaster enabling states to withdraw funds from the Disaster Relief Fund.  A day-long Janata curfew on 22nd March 2020 (a voluntary curfew adhered to by the people) was followed by a 3 weeks country wide lock down from 24th March 2020 to 14th April 2020 which included closing of state boundaries.  Immediate actions were taken to scale up detection by enlarging the scope of testing facilities beyond government laboratories and setting up quarantine facilities.

The fall out of the lock down was a mass movement of migrant workers specially in the north of the country back to their hometowns. Though against the rule of the curfew, this migration was an inevitable response from the migrant workers, many of who are daily wagers and work as domestic workers, construction workers, street vendors, small time barbers and tailors and the so called delivery partners  in the thriving economy of metropolitans. Post the announcement for lockdown they had to leave their city of work as they had no idea how they would cope without their daily payments for their livelihood.

An unfortunate incident occurred on 30th March 2020 in which the migrant workers were sprayed with a disinfectant in Bareilly, Uttar Pradesh before they could enter the city. The chemical sprayed on them was sodium hypochlorite, a disinfectant which is harmful for humans. Apparently, the same disinfectant was used to sanitize the buses and bus stands. This incident shook the conscience of the nation. The media played its role in highlighting their plight and the administration in different states did try to address the crisis.

Immediate measures to deal with the situation included provision of transport and food but long waits, crowded spaces, and uncertainty continued. In other measures to mitigate the situation the Government announced a Rupees 1.7 lakh crore ($22 billion) COVID 19 package targeting mainly the poor.

The package includes free food grains and pulses under the Public Distribution System (PDS), direct cash transfers to farmers, and others including widows, women Jandhan bank account holders and migrant workers. Insurance for health workers is also part of the deal.

In order to understand the ground realities, we have been in contact with our partner organisations to know what is happening in their immediate surroundings. Here we share the initiatives of a few of these organisations who, on their own, within their own financial means and their network of volunteers and other civil society organisations are trying their best to supplement and collaborate with the various government initiatives.

Social Action for Human Resource Development (SOHARD) is an NGO based in Rajasthan, working on the issue of local governance with a special focus on women’s effective participation. It tries to build confidence amongst women including elected women representatives to participate effectively in Panchayati Raj Institutions. Their core work is in 25 Panchayats covering 60 villages in Neemrana Block of Alwar district in Rajasthan. They also have an active network of organisations associated with similar work in all the 33 districts of Rajasthan.

In its core work area during the COVID 19 pandemic SOHARD has mobilised its team to ensure that “no one sleeps hungry in my village and in my neighbouring village”.

Accordingly, they have started community cooking centers to ensure food for the most vulnerable groups including migrant workers who have returned to their villages from neighbouring cities and states.

This is possible as SOHARD has 60 village level volunteers, and 25 cluster level trainers in their core work area for their regular work of training women for effective participation in Panchayats. Emulating the work of SOHARD many of their network members in other districts are also carrying out similar relief work. It is pertinent to mention here that besides migrant workers there are many other women and men in self-employed category like barbers, masons, mobile vendors etc. who are not able to carry out their trades due to the lock-down. The local media is also playing a constructive role highlighting the relief work, contacting the district and government officials in order to facilitate the smooth functioning for the volunteers during the lock down. Young women and men in the villages who are not part of SOHARD programmes are also coming forward to mobilise funds and to work towards community outreach.

Social Centre for Rural Initiative and Advancement (SCRIA) is engaging with women and youth groups for initiatives on local self-governance in the two states of Haryana and Rajasthan. Its goal is to organize rural communities for sustainable rural development.  Accordingly, SCRIA has been building capacities of rural communities for their meaningful participation in self-governance processes for inclusive governance. In Haryana their base is in Rewari district, which has no case so far, though Haryana has 141 cases of COVID 19.

In these trying times SCRIA has identified four priority tasks for themselves. The first is awareness amongst their outreach villages on the pandemic including basic safety measures.

Secondly, to ensure the PDS is available as promised by the government including the enhanced free quantities for the poor and vulnerable. Thirdly, providing food material and supplying it to the district administration to distribute for the returned migrant workers or those who are stuck on the way home due to the lockdown. And fourthly to ensure that local grocery stores display decided rates for items and do not overcharge any customer.

In Churu district of Rajasthan, the situation is different. There are more vulnerable groups and no work options as they do not have winter crop harvesting unlike in Haryana. There are many regular migrant workers who come here from Gujarat to sell agricultural and other produce for livelihood. They normally stay in makeshift tents and return once their goods are sold.

SCRIA has taken the cooperation of district authorities to allow two workers and local volunteers to ensure provision of two meals a day to such families.

URC is working on ward based participatory planning and brings together citizens, local groups, women councillors and municipal councils for these tasks.

Although due to the lockdown in the country movement is restricted, still many of the network councillors are playing a catalytic role in providing rations to the poor and marginalised families. In towns outside Bangalore the mobility is not so restricted, but livelihoods have come to a standstill. Their endeavour is to provide enough dry rations for these families including sanitary and medical products where there is a request for the same.

In Mangalore town URC has been undertaking a study on single marginalised women and has made a network of around 100 women in the town.

In COVID 19 times they are keeping in touch with each other – providing moral and material support.

In the age of social distancing, which is here to stay in the foreseeable future, new forms of social solidarity are being witnessed. FES partner organisations are normally not into relief work. However, seeing the extent and severity of this pandemic they are doing what they can. The networks and the staff and volunteers are similarly committed and engaged. Many of them are themselves in the vulnerable age groups. They have their own families, children and elders, to take care of. We are proud of each and every one of you. We are in this together and will emerge out of this together - more unified and more connected.

Damyanty Sridharan is Senior Adviser of the Gender and Social Justice Program at the Friedrich-Ebert-Stiftung India office in New Delhi.

Jyoti Rawal is Program Manager  of the Gender and Social Justice Program at the Friedrich-Ebert-Stiftung India office in New Delhi.