Attaining decent work for all has been the driving force for organisations working on labour issues. With the onset of COVID-19 pandemic, workers across sectors have been impacted. In a labour surplus country like India, the challenges have intensified, and decent work deficits became evident among a larger section of working population. This series of four publications looks at the elements of decent work (Employment Creation, Social Protection, Social Dialogue and Rights at Work) and way forward for its realisation.

In India, there remains a deep disjoint between the modern-growth economy and the vast swathes of labour, especially in the low-skill category and in the hinterlands, resulting in the aggregate labour productivity remaining low. It is often stated that India needs to create as many as 8-10 million remunerative jobs annually over the next several years if any semblance of decent work is to be achieved. This is also the requirement of Sustainable Development Goals (SDG-8), to which the country is committed. The first paper looks at the current employment scenario and puts forth a policy thrust for creating better quality jobs.

India is amongst the founding members of the International Labour Organization (ILO) and is committed to upholding its conventions in most parts. Laws have been enacted to closely match conventions. The second paper looks at the prevailing labour situation considering existing legal framework and major labour laws aimed at protecting rights at work.

Social dialogue is often regarded as an important tool in cementing good relations among representatives of the government, employers and workers on issues of common interest relating to social and economic policy. But for social dialogue to thrive it requires a conducive environment and willing stakeholders. The third paper examines the nature of social dialogue in India, the challenges faced and the need to put social dialogue at the centre of the country’s policy framework to minimise footloose workers to become ‘let-loose’ labour.

The last paper looks at the social security gaps confronting a large section of the workforce who are not adequately covered by existing social security legislations / schemes. Further outlined is the evolution of social security in India and under pins the need for developing an inclusive social protection based on a rights-based framework. 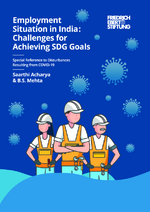 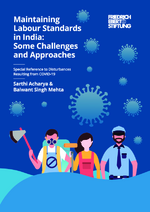 Maintaining labour standards in India: some challenges and approaches 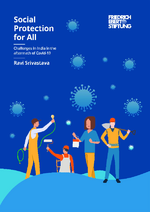 Social protection for all

Challenges in India in the aftermath of Covid-19
NewDelhi, 2022 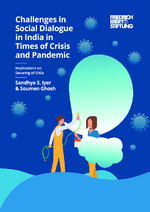 Implications on securing of SDGs
NewDelhi, 2022

For more information about the by FES India on trade, labour and social justice contact the India-based Friedrich-Ebert-Stiftung India Office and follow the facebook page for regular updates.