Sonal Shukla, a feminist, a Gandhian and a critical thinker in thought and action , is indeed a Gender icon! Read about Sonal's journey in this new graphic novel. 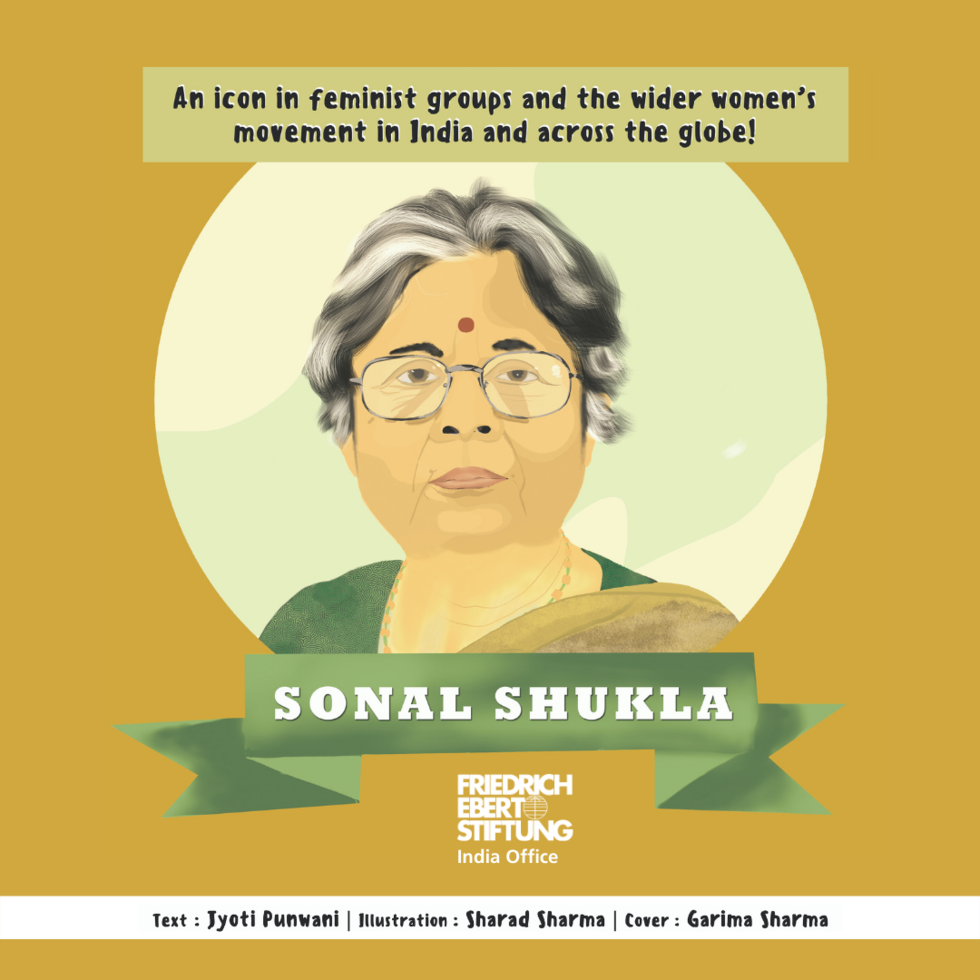 For more than three decades now, Sonal Shukla’s name has been synonymous with Vacha, the feminist group that transforms adolescent girls from Mumbai’s slums into confident citizens who can question the authorities who rule their lives. Every aspect of this transformation bears traces of Sonal’s unique personality.

In the spectrum of Mumbai’s feminists, Sonal stands apart, and not only for her wry wit. In interviews with the media, her perspective is always fresh, thanks to her lifelong interactions with people from the most deprived sections of society. These interactions started way back in her teens. Her school principal introduced Mahatma Gandhi’s Basic Education methodology to the school, and topics such as social studies came to life when students met indigenous communities and Dalits in nearby settlements. The interactions continued more meaningfully when Sonal worked with the principal and his wife for 16 years as a teacher and then a lecturer in their college of education, in charge of projects involving sanitation workers, the lowest strata of society, and fisherfolk, Mumbai’s indigenous inhabitants.

It is this grounded approach that makes Sonal such a magnet. She has lived the feminist slogan: “the personal is political”. Sonal was among the founders of Mumbai’s first autonomous feminist group, Forum Against Rape (founded in 1980, it later became Forum Against Oppression of Women), and turned her own home into a support centre for battered women for two years. “Our needs were few,’’ she says about her and her doctor husband’s decision to let one room in their house be used as a space for women they hardly knew. These four simple words reveal her deep commitment to women’s rights.

In the 80s, feminist voices were flowering. Sonal had a background few others did: brought up without any religious rituals and with the rich literary and spiritual heritage of India. The works of leading Bengali poet and thinker Rabindranath Tagore, and the writings of the saint-poets thanks to her poet father had a great influence on her. She was schooled in her mother tongue; trained in Gandhi’s educational methods and had worked with the most deprived sections. The English language press would have welcomed her as a columnist. But Sonal chose to write a column in her mother tongue: Gujarati. That meant a lower social profile, and less payment, but it also meant reaching out to a larger audience, one that needed to hear what she had to say: i.e., average women. The feedback she received was tremendous; the initial hostility by men an indicator that what she was writing was making a difference.

Sonal has, in fact, made a difference to women’s lives in all that she has done. Vacha started off as a resource centre for anyone interested in the women’s movement, a space where you could drop in to borrow a book and encounter an award-winning writer giving a talk. The organization has documented and made accessible the lives of those early freedom fighters, the feminists of the early 20th Century. Most of all, it has given space to poor adolescent girls to escape from family and community strangleholds and experience to the fullest this crucial phase of blossoming of their personalities, through a programme of life skills and community work.

To read more about the Icons of gender justice in Asia, please refer to the following publication